BOO! Did I scare you? Probably not. Anyway, welcome back to Nico Talks About Creepypastas, where this guy behind the screen called Nico talks about internet stories called "creepypastas". Yay!

As you may know, Matt Groening is the creator of the Simpsons. During production of the first Simpsons season, he started behaving weirdly. So, he created the episode with the production number 7G06, which is the production number of a real episode in Season 1 called "Moaning Lisa".
The author of the Pasta (let's just call him Nico because why not) got the opportunity to meet Matt at a fan meetup. When he was asked about this Lost Episode, he turned pale, was close to tears. Matt wrote something on a piece of paper, gave it to Nico and told him to never bring this episode up again. An unknown URL was written on that piece of paper. When he typed it in, he got to a website that looks like this...

Nico clicked on the download link, and a download started. (No shit) And lo and behold, it was a virus from HELL. System Restore didn't work, Windows had to be reinstalled. However, before that happened, he copied the file onto a CD. It was the episode. It consisted of three acts, so here's descriptions of all three acts:

Act I - The Plane Death
First of all, we have an angry Homer, a depressed Marge, an anorexic Lisa and a hateful Bart. They want to do a plane trip. Great idea. As the plane takes off, about 50 feet in the air, Bart accidentally destroys a window and gets sucked out, resulting in his death. At the beginning of the series, Matt said that he wanted the animation style to be very realistic at times, and that was used for Bart's dead body. (Warning: the picture contains graphic content) 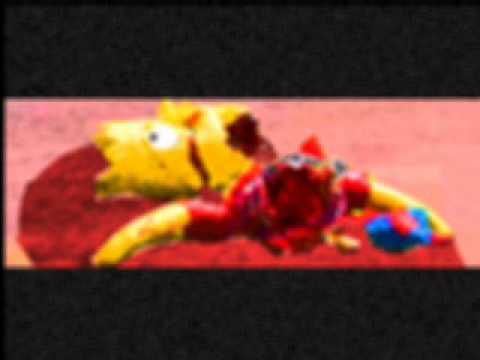 Act II - Cry Me a River
I chose that title for a reason. Homer, Marge and Lisa are sitting at the table crying. Throughout the ENTIRE SECOND ACT.

Act III - "One Year Later..."
...is what it says at the beginning of Act III. The Simpson family is still sitting at the table, as skinny as skeletons. No sign of Maggie or the pets. Later, they walk through an empty Springfield into the cemetery to find Bart's dead body laying in the same exact position as at the end of Act I. (basically like the graphic picture) They start crying again, and Homer tells a joke, but it's unknown what exactly he says because the audio is really bad. At the very end, the camera zooms out to show the other gravestones in the cemetery. They're all gravestones of celebrities that have had guest appearances in the Simpsons. Some of them were unknown back when the episode was made. Some of them didn't have their guest appearances yet. Their death dates were ALL correct. That's not all though.

There's also death dates for those who haven't died yet. All these death dates are listed as the SAME DATE.

That's it for today's Creepypasta! Just like Suicidemouse, there's fan-made videos that try to replicate this episode. There weren't any videos that were very good, but here is, in my opinion, the most accurate representation, made by The Lavender Town Project (yes, the bad quality is supposed to be like that):

Link to the CP: http://creepypasta.wikia.com/wiki/Dead_Bart